What is Form 16B?
Search
Close

Form 16 is a certificate for tax deducted at source (TDS) on a person’s income under the head ‘salary,’ which is given under section 203 of the Income Tax Act, 1961. It is given when an employer deducts tax from an employee’s salary and deposits it with the government. The document contains a full breakdown of the money paid or credited to the employee, as well as the applicable TDS. This form is usually issued after the end of the financial year for which it is issued, in compliance with the terms of the Income-tax Act (IT Act). If the employer has deducted the tax from the employee’s salary, the employer is required to issue the certificate to the taxpayer. Form 16 facilitates the submission of an ITR because it contains information about a person’s pay and tax exemptions that are conveniently accessible. The TDS certificate comprises of two parts, namely - Part A and Part B. It is important to note that both these parts should have the TRACES logo on them, as only then they will hold value. 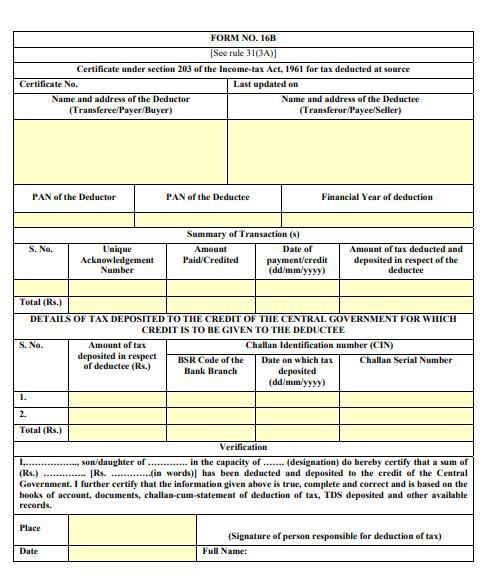 Form 16B or Part B of Form 16 is actually an annexure to Part A, and the employer has to issue this part. Part B includes important information and details like the salary breakup (in detail), income tax exemptions under section 10 of the Income Tax Act of 1961, deductions as per chapter VI-A of the IT Act such as Section 80C, Section 80D, and other relevant sections; the standard deduction given to salaried employees, and section 89 related relief.

In India, the filing of Form 16B TDS is compulsory, and failure to do so results in a penalty. For this, a penalty of Rs.100 is charged per day. It should be noted that the deductor must provide this document to the recipient within 15 days of the given deadline. This is in Form 26QB for the challan-cum statement.

Salaried people are taxed according to appropriate slabs under the Income Tax Act of 1961, and are expected to file tax returns by a certain date each year. Form 16 is one of the certificates issued by employers that includes information about what salaried employees must file in order to file and submit their income tax returns.

When filing their forms, taxpayers frequently mistake Form 16A and Form 16B. Despite the fact that they are all part of the same certificate, each form serves a different purpose. To greatly simplify the tax filing process, taxpayers must learn about their individual reasons so that the process gets more streamlined and smoother. It is important to know the details so that the formalities can be looked into, in the right manner.

What is the Maximum Maturity Benefit in Assured Savings Plans?

What is ITR & How to File Income Tax Return?

How to create a savings plan and make good investment choices

Who Should Invest In Savings Plan

How Do Assured Savings Plans Work and Why You Should Consider One?

How to Boost Your Savings with Guaranteed Results

What is indirect tax and its types?

How to create wealth through a savings plan?

How Should I Allocate A Monthly Savings Plan For Long-Term Benefits?

How to Calculate returns on an assured savings plan?

How To Invest In Guaranteed Return Plans For Higher Returns And Financial Security?

Is PF Withdrawal Taxable for NRI?

What is the Difference between Assessment Year (AY) and Financial Year (FY)?

Difference Between Guaranteed and Assured Returns

Best Savings plan for the middle class in India

All You Need To Know About Assured Savings Plan

All you need to know About Tax on Inheritance

What is EEE in income tax? 5 tax-free investment options to become crorepat

What are Deferred Savings Plans?

What is the difference between TDS and TCS?

Should you prefer a Guaranteed Savings plan over monthly income schemes?

What is a savings plan?

9 Unusual Investments you Didn't Know for Saving Taxes in India

Post Office Savings Scheme - All You Need to Know

What is capital gains tax, and how it works?

Income Tax Deductions for Disabled Persons Under Section 80U

How can NRIs prevent double taxation in India?

What is Rule 132 of Income Tax? How Does it Affect You?

How to File Income Tax Return - Everything You Need to Know

Tax Season is Coming- Know How to Save Tax

Should one prefer a guaranteed savings plan over monthly income schemes?

Importance of Savings Plan You Need to Know

8 Things to Help You Select a Savings Investment plan

TDS rules on the sale of jointly owned property

How much gold can you keep at home? Limits and income tax rules explained